Christmas 2014 was anything but merry.  The swimsuits, flip flops, suntan lotion and pool toys sat in a pile on the chasse in my bedroom.  We never made it to the Florida Keys for our vacation.  A member of our extended family came down with pneumonia and then a snowball effect of more health problems that included a 12 day stay in the hospital.  Nick wasn’t sure what to make of things.  He is 20 years old and has Down syndrome and autism.  All he saw was his Dad or me taking off all day on hospital visits which were an hour away.  Nick picked up on the fact that something was very wrong.  He was sad and angry and missed being with the extended family.  We spent that two week break unsure of the outcome and shooting from the hip.  In 20 years of raising Nick, I have NEVER seen such a spike in regressive behaviors.

When daily routines are interrupted a child with autism can feel anxious and behaviors regress.  Strict routines, normalized school or work schedules without any unexpected occurrences enable a child with autism to progress best.  However, because the holidays are busy, stressful and filled with the hustle and bustle of foods, gifts, and family; a parent can expect to see behavioral changes.

Back to Nick and those behaviors that spiked, which included the following:

*Throwing objects and dumping things like a one man wrecking crew.

*Spitting and rubbing snot on flat screen TV, windows, on our clothing. 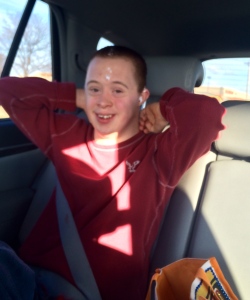 And to top it off, I left a bottle of Febreeze out by accident………Oh nooooooo!

FYI, Febreeze and a flat screen TV don’t mix well.  So, we had to purchase a new one……..

By the way if you Google search “Febreeze on a flat screen TV” there are several entries of other kids doing this.  Nice to know we’re not alone. 🙂

I reported all of this in the school/home communication book.  The school staff wrote back that Nick was definitely not himself. He was trying to pull fire alarms, pinching his cheeks hard as well as a staff member.  To make matters worse, just as Nick was back in his school routine we had two snow days.  On top of that, the kids were off two more for the end of semester and MLK Day.  Oh, and there was a full moon over the holiday break. 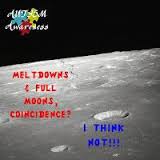 The house is quiet now, and I can focus on writing again. Yesterday, I did a little research on regression of behaviors and holiday breaks.  As I reflect on Christmas 2014, a couple of things stand out.  First of all, Nick’s behavior was magnified because his parents emotional fatigue and lack of emotional availability.  For over two weeks we were back and forth at the hospital.  Nick picked up on the stress.  Secondly, as a family we should have communicated in private about medical updates.  I think back on one particular day.  As I briefed Al on the hospital visit, Nick came over crying and wanted a hug. I had to remind myself that he understands much more of what we are talking about.  He also picks up on the negative vibes of conversations. Finally, one tip I read in my research was so obvious.  But when you are in the thick of things it can be overlooked.  That is, don’t let your kids be aimless.  It’s essential to find ways for them to occupy your child.  When kids are on a school break, they have less structure in their day. Bottom line, they’re going to get into more trouble and conflict because they have the opportunity to do so.

While there was no kayaking, bike rides, beach and pool time or key lime pie over Christmas we did make it through.  Things are slowly on the mend. The cousin’s presents and white elephant gifts are tucked away for now.  The Hormel Cure 81 Ham sits in the refrigerator awaiting a belated Christmas celebration at a later date. The gift of Christmas 2014 is being reminded of how precious life is and how quickly it can be taken away.  In addition, I have a new perspective of how important it is to respect Nick’s needs when there is a school holiday break. That’s what is in my noggin this week.

Teresa is the Author of "A New Course: A Mother's Journey Navigating Down Syndrome and Autism" and the mother of two boys. Her youngest son, Nick is 27 years old and has a dual diagnosis of Down syndrome and autism (DS-ASD). Teresa's passion is helping others understand and navigate co-occurring Down syndrome and autism. She is a DS-ASD consultant, advocate, speaker, and author. Follow Nick's world on Facebook, Instagram & Pinterest @Down Syndrome With A Slice of Autism and on Twitter @tjunnerstall. For more information and media links, visit https://www.teresaunnerstall.com View All Posts

7 thoughts on “Blog #112~Regression of Behaviors”