Each year we take a vacation to the shores of the Outer Banks in North Carolina.  This summer we added an extra leg to the trip, spending the first week in Virginia.  Nick’s aunt and uncle own property with old tobacco barns they’ve renovated into beautiful living spaces.  This area is located above the banks of the James River.  My son Nick is 23 years old and has Down syndrome and autism.  The quiet country life seemed to agree with him.

Nick enjoyed his time in Virginia, especially the rides on the John Deer “Gator”. 🙂  The renovated tobacco barns were made into living spaces.  They were very accommodating and cozy. 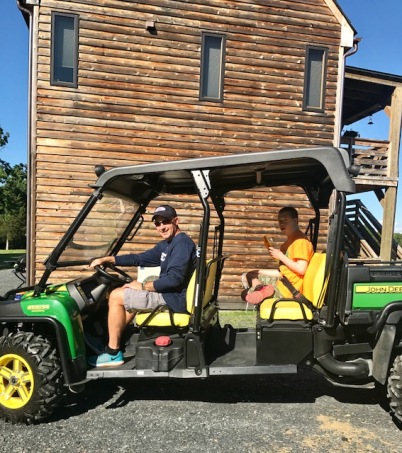 Nick got very relaxed as we did some kayaking on the James River….

Kayaking the James River was very soothing for Nick….. 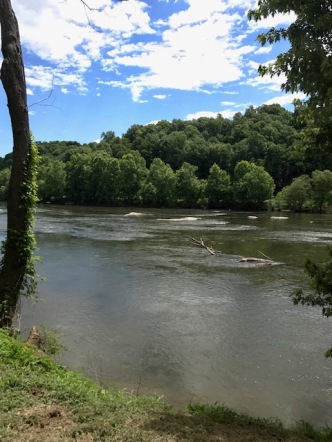 One of the highlights for me was touring Thomas Jefferson’s estate, Monticello.  Thomas Jefferson has always been my favorite president.  He was a visionary, who had big dreams to expand our country which included exploring science, architecture, paleontology and much more.  Monticello was the center of Jefferson’s world.  When touring his home and plantation high on the mountain top, you can feel the inspiration of his timeless ideas.

The second part of the vacation was our annual trip to the Outer Banks, NC (OBX).  We shifted gears from country living to beach life.  When you see these signs, it’s time to relax and turn the knob to Bob, 93.7 FM.  Destination, Duck, NC! 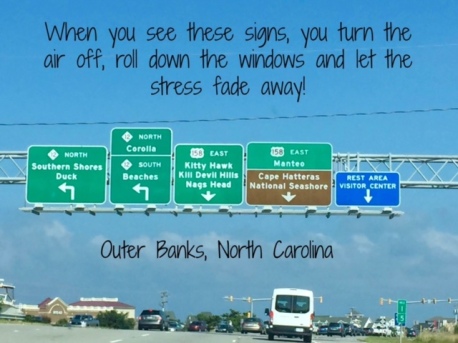 Nick enjoyed his travel companion, Cali who decided to make herself comfortable on his lap on the road trip from Virginia to OBX 🙂

Our gracious hosts, Uncle Ron and Aunt Ali also have a beautiful home in OBX.  Nick feels very comfortable staying there for several years.  Cali, their dog seems to be very content as well…..

Our backyard view for the week…

Nick had a great time, and we even got him on the beach on several occasions.  He’s not a big fan of the texture of sand and heat, due to the sensory issues associated with having autism.  But we pushed his boundaries and he did great sitting under the umbrella with his legs propped up.

Beaching it with his bro….. 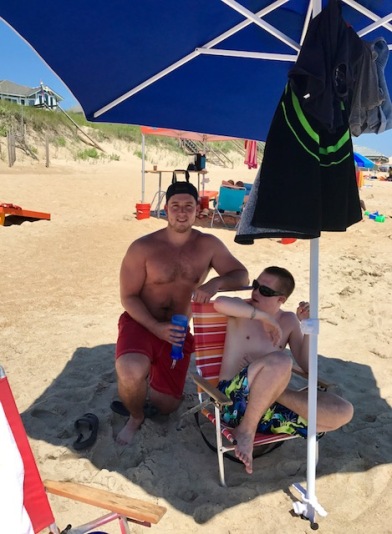 The house also has a pool that Nick splashed around in each day….

Happy hour at the crow’s nest with his “stim” of choice, the tappers!

Summer 2017 vacation was a great success!  There was not a single fire alarm pull or call button pushed while on the airplane.  Nick stayed on an even keel with his behavior.  The only outburst occurred on my birthday at the Aqua Restaurant, located on the sound side of the island.  Towards the end of our meal, Nick was done and stood up.  His Dad tried to get him to sit back down, but he wanted no part of it.  As Al motioned him back to the chair, Nick yelled “God Dam#*it”, which echoed out, silencing the entire dining area. There was a notable pause with all eyes glaring at our table.  Autism spoke loudly in that moment.  Fortunately, things did not escalate, and we allowed him to remain standing as we finished dessert and settled up the tab.

It was a fun and relaxing two weeks in Virginia and the Outer Banks.  The success of such a trip comes with using picture icons to help him navigate his days and anticipating possible triggers of Nick’s behavior.  We watch his body language for things that might spark a meltdown, and cut it off at the pass or redirect quickly, before things escalate.  Yes, we pushed the boundaries by trying new things like kayaking, riding on the gator on a property tour, and longer & more frequent trips to the beach.  But each was met with praise and rewards (Sprite, iPad, salami) along with elbow bumps.  And don’t forget the tappers, or stim of choice that your child needs to regulate thier sensory needs,

Keep pushing the boundaries with your child, and don’t limit what you think they can handle on a vacation.  It’s worth a try for your child and the whole family.

As I post this final picture, I treasure the new memories made on this vacation.  And as Ali told us before departing, “Try to stay in beach mode as long as you can”.  That’s what is in my noggin this week. 🙂