The iPod has disappeared, here we go again…..geesh.  One of the many “gifts” that Nick has given me besides razor sharp reflexes is a keen eye as a sleuth detective. 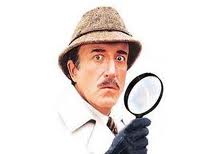 Things have a way of vanishing into a *black hole around here.

Since Nick has Down syndrome and autism and limited verbal skills, I can’t exactly ask him to back track his steps to find his iPod.  I showed him the media bin where it’s should be kept as I signed the word, “help.” 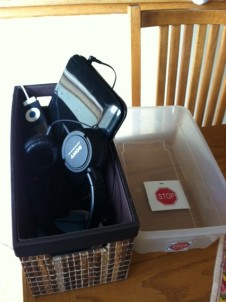 Then, I pointed to the icon in his communication book asking him where is it?  I am met with a blank stare.  So, I take off to check the usual spots.  First stop, behind the couch….nada.  Next, a peer underneath my bed….nil. Now I have to do some back tracking.  When did he have his iPod last?  Over twenty minutes have past as I searched the house.  Then I remembered he was hanging out in Hank’s room.  I do a full room scan for a few minutes then zero in on the bed.  I pulled the comforter back…..bingo!

A few weeks ago I thought I was losing my mind.  I had a stack of letters sitting on the kitchen counter that I was going to mail the next day.  Poof, they were gone.  I sent a text to Al to see if he had mailed them…… nope.  I followed the trail again checking the usual spots….crickets……

I dug my way down the garbage, picking through as coffee grounds and gunk stuck to my hands.  No luck. 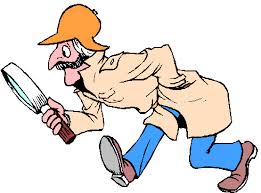 Finally I had one last thought.  I opened the door to the basement that is in a state of disarray after being flooded  from the spring rains in April………

There’s an hour of my life I will never get back.

What is the worst thing that has vanished in the black hole?  The entire contents (10 pages) filled with icons out of Nick’s communication book.  I spent a day and a half a day sniffing out every trail I could think of that Nick might have taken.  I couldn’t imagine having to make all those icons, laminate and apply the Velcro again.

I went into the bathroom to see if he might have flushed them down the toilet. Well, it wouldn’t be the first time.  In Blog #21~ What is Normal?  (located in the September 2012 archives), I wrote about the time my leopard reader glasses went missing.  I always keep them next to the laptop in the same place.  The next day Sergio, our plumber was fixing a clogged toilet…… 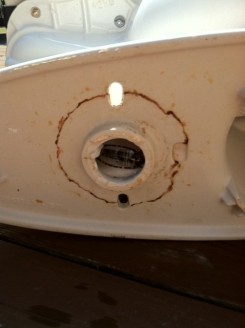 “I found out why your toilet was clogged. You can still wear theeeese glasses they were in clean water, not poopy water.”

The toilet flushed just fine, what a relief…..  The next day, I went to get Nick’s work bins that are stored on a high shelf in the laundry room.  I glanced inside one.  He had emptied his book one by one and put them all in here.  Whew……Thank goodness! 🙂

Communication Book restored, we dodged a bullet on that one…..

The phone went missing a few weeks ago. The phone is easy to find since you can hit the intercom button, but not this time.  Finally I discovered it tucked in the blue bin where I keep my blow dryer. Normally I just reach up and pull the dryer out, but last Thursday and I pulled the whole bin down.  Mystery solved, inside there it sat, the long, lost uncharged phone.

It seems as I write this piece there is a pattern emerging.   Nick definitely likes to drop things, but then other times he likes to put them up in those high bins. Note to self for the next thing that drops into the black hole. There are no lessons
to be learned this week.  It’s just a slice of life in Nick’s world…. The rest of us are just trying to keep up!  That’s what is in my noggin.

*According to Wikipedia:  “A black hole is a region of space-time from which gravity prevents anything, including light, from escaping.[1] The theory of general relativity predicts that a sufficiently compact mass will deform space-time to form a black hole. Around a black hole, there is a mathematically defined surface called an event horizon that marks the point of no return. The hole is called “black” because it absorbs all the light that hits the horizon, reflecting nothing, just like a perfect black body in thermodynamics.”