Blog #20~ Is That Age Appropriate?

Yesterday, I ordered Nick’s senior portraits online with the sound of Thomas the Tank Engine in the background. Sometimes it feels like I am living with a perpetual three year old. It got me thinking about some of the toys, music, and DVD’s we have weaned him off of in order for him to be more age appropriate. Yes, he is still drawn to some of that stuff.  Last week, we were in the waiting room at speech therapy and Nick grabbed up a Fisher Price musical toy. A couple of four and five year olds looked at him oddly as he towered over them swaying side to side to the song Twinkle, Twinkle, Little Star which blared out of the toy with blinking lights. That is Nick’s idea of heaven. I had a flashback to seventeen years ago of the special needs support group meeting back when we lived in Houston.  The guest speaker was a mother of an eighteen year old who had Down syndrome.  I still remember her words in that sweet Texas accent, “What looks cute at age three is not going to be at age thirteen. She was right, I get that now. I asked him to give me the music toy so he could go in with his therapist, Brian. Suddenly he let out two words clear as a bell…..”Oh shit”…. now THAT was age appropriate.

I spent a lot of time over the years researching toys and activities that would enhance Nick’s development. There are several resources listed on my website.  Just the other day I stumbled upon a great site for age appropriate activities broken down in age groups.  Check it out at http://life.familyeducation.com/child-development/activities/63988.html.    One of my favorite bloggers is Noah’s Dad, he has his finger on the pulse regarding young babies and children with Down syndrome, check him out at: http://noahsdad.com.  He offers a wealth of information, links for great toys for younger kids and Noah is absolutely the cutest thing. One more note regarding age appropriateness for our kids with special needs, take pause in what the age level of manufacturer’s label states. It’s important to look at the developmental age of the child.  For instance, if the child is ten years old and functioning like a six year old, it would be wiser to pick a toy that fits their functional ability. Bottom line, you want your child with special needs to enjoy the toy and not be frustrated.  Autism and frustration is never a good mix!

As a mom, you want your child to fit in.  I can’t control the behaviors of my son that make him stand out in public (hand flapping, rocking, and loud noises that sound like a baby calf mooing.) But I can make sure he is dressed stylish and that he won’t be walking around with a baby toy that will make him stick out even more than he already does. In addition we ditched the Dynavox (aka “The Brick”)  that was his speech output device.  It was too big, bulky and not functional out in the real world. It has been replaced with an iPod touch chat program. 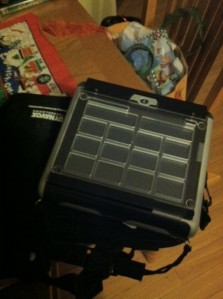 The old school CD player with nursery songs is long gone too…….

Nick had his own playlist at age 5….. 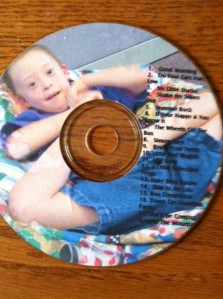 Look at that yoga boy…. so bendy 🙂

So here is the current state of Nick and trying to keep the cool factor going…..

Nick’s iPod playlist= It’s everything from Lady GaGa to LMFAO and in between including some gangsta rap that his brother, Hank got him hooked on. 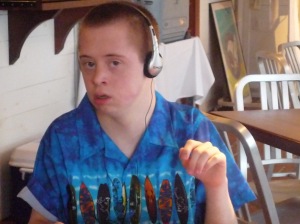 While I think Nick would be perfectly happy staying with the kiddie stuff, I have this longing for normal.  I wish he could play Wii/ X-Box video games and Angry Birds like other teenagers.  But that is my dream not his.  I have to remind myself to find a balance.  I need to remember the things that bring him happiness, resonate and connect the “dots” for him. Much like that furry, stuffed animal or blankie we hold onto from childhood, Nick still longs for some of those simple toys and watching Thomas the Tank engine every once in a while to make him feel secure. At home we allow it. He is safe with his friends Thomas and Harold the Helicopter.

Today, naughty Harold made the cat’s head his landing strip, flipped the light switch repeatedly…hardy har har… and proceeded with some “*Tomfoolery”  at the stovetop…. 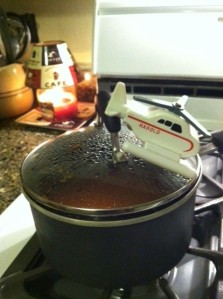 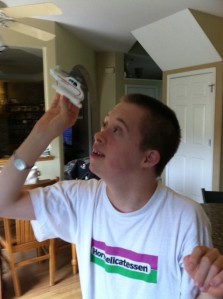 Age appropriate no, but sometimes it’s kind of fun to not act your age.  That’s what’s in my noggin, until next week have a great Labor Day my friends.

*According to Randomhouse.com *Tomfoolery is foolish or silly behavior. A tomfool was originally Tom Fool, with Tom, a nickname from Thomas, being a stereotypical male given name. Tom Fool is thus a sort of fourteenth-century equivalent of our modern Joe Cool. As a (fictitious) proper name, Tom Fool is first recorded in the fourteenth century; a sense ‘a person who plays the part of a fool in various dramas; buffoon’ appears by the seventeenth century. The generic sense ‘a foolish person’ is first recorded in the early eighteenth century.