Well this happened over the weekend in St. Louis, Nick pulled his 50th fire alarm at a wedding reception.  The Unnerstall’s are a big family and like to celebrate in a grand way.  The venue was the Chase Park Plaza Hotel in St. Louis.  The cocktail hour was just wrapping up, as the procession began to move into the dining area, that’s when it happened.

The fire alarm was tucked behind a curtain and only partially exposed.  That’s all it takes for Nick.  My eyes momentarily diverted to the photo booth area, just to the right of the curtain.  That’s when Nick made a run for it.  I dashed over in my 3 inch high heels, and grabbed his hand just as it grazed the alarm.  He got me, after an 8 year run with a clean record.  As his middle school teacher Jess told me once, “He’s cheetah fast!”

Two young men in their twenties busted out laughing, one saying, “Man, I always wanted to do that.”  In the moment, I was not laughing.  But admittedly, it’s hard not to chuckle at the absurd number of pulls Nick has done since third grade.  We got someone to alert the hotel desk, that it was a false alarm.  Fortunately, they didn’t evacuate the building during that stormy evening.  We walked into the dining area as the lights flashed and the sirens blared loud for well over 5 minutes before they shut off.

I should add here that in Nick’s behavior plan, it calls to remove him from the building giving no reinforcement or reacting to his actions.  This reduces him from getting the rush he seeks from the loud sirens and lights flashing.  However, the venue was in the middle of downtown St. Louis with busy streets, being on the upper floor of the hotel, and stormy weather didn’t make it feasible to do so.  Visuals are used as well, these support a person who has autism.  He also has a social story that we review, however that seems to be ineffective.  Compliance commands are another tool we utilize.  If a directive has too many words, it may be too complicated for an individual with autism.  Thus, the individual may not be able to process the information.  Using compliance commands with fewer and concise directives help them to stay on task.  In the case of walking down a corridor, we use these two directives, “Big guys keep on walking” and “Hands to self, Nick”.  These compliance commands do help Nick to stay focused and remain on task.  Nick is then given praise and positive reinforcement for making good choices.

Nick is quite pleased at himself for adding to the wedding reception festivities, me not so much 😮 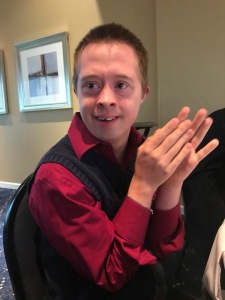 So how did this all begin?  Some individuals with autism are sensitive to over stimulation from a sensory standpoint.  Nick tends to actively seek out more sensory stimulation on a daily basis.  It all started innocently with car remotes keys.  Nick realized at an early age that if you push the red panic button, it sets off the car alarm and the headlights will flash.  He once took the key remote out of a babysitter’s purse, and proceeded to walk up to the front door, point it at her car and set off the alarm.  By third grade, he discovered fire alarms at his elementary school.  In a matter of 2 days he set the alarm off 3 times.  We’ve noticed a pattern over the years, that the alarm pulls tend to come in three’s.  Just last week, he set off an alarm at his day program when a staff member was tending to another client.  She thought Nick would remain on the swing in the gym.  But that’s when Nick strikes, just when you divert your attention, even for a second.

The first time Nick got me was leaving the doctor’s office, as I fumbled in my purse to get the car keys.  Another time, while I was wearing a clunky therapy boot, he let go of the grocery cart and darted to one at Dominicks 8 years ago.  His Dad “technically” has a clean record.  However, Nick nearly got one on Al, at Houston’s Bush International Airport where the alarms are painted silver.  Just recently, we attended Nick’s cousin’s graduation ceremony from Bowling Green State University.  Al took Nick to the restroom he came close.  Nick pulled up a cover which sets off a very loud mini alarm alert.

There’s been some good replies on social media, that have eased the sting of being the big 5-0, one being this, “I’m sorry but I just have to laugh.  I know that you probably don’t laugh when he does this, but the sign does say pull down.  So what else is he supposed to do?”  Another reply on Facebook, “Ever vigilant Nick!  He wanted to add to the excitement.”

Well, excitement is right, Nick sure did light up the wedding reception.  I guess if he’s going to pull #50 it should be in a big, fancy venue, surrounded by family.  Go big or go home, Nick!  This weekend is one for the memory book, and Nick gave the newly wedded couple a night they won’t forget.  As his tagline says, It’s Nick’s world, the rest of us are just trying to keep up.