I am not sure how this blog is going to come off this week. I am surrounded by loud banging while the workers are replacing the siding on our house. Unlike Saturday when it felt like they were going to come straight through the roof this is more like a piercing in the walls coming at me from all three sides.  Add the sound of scraping metal like finger nails on a chalkboard….You get the picture now, right? It’s like Nick stimming and banging times a trillion.  I should take an Advil now before the pounding goes to my head.  So here we go……..

It was during Thanksgiving week in 2001 when we made our way across the country on our move from the San Francisco Bay area to Chicago.  I am a native Texas gal.  Right from the *get-go I noticed a few different things and that there would be a learning curve to living in the Midwest.  Before I roll up my sleeves on this piece I think I will retreat to the basement, which bring me to my first observation.  There are no basements where I grew up in Texas. It’s nice to have the extra space for the kids to stretch out and play when the weather gets too cold outside. Speaking of cold, the first day I went out to get groceries it must have been 45 or 50 degrees.  In route to Meijer, I was shocked to see the mail carrier wearing shorts.  Once I got to the store I bought a pair of gloves and put them on right away. A few weeks later, we were at the mall.  I remember asking my Mother in law, Theresa why there were red stakes on top of the fire hydrants.  She explained that is so the firefighters could locate the hydrants when the snow gets high.  After I picked up my jaw off the floor I had to wrap myself around the fact that I was going to have to learn to drive in the snow.  It was not going to be easy as I had a Ford Explorer with rear wheel drive (I bought the car in Texas, no front or four wheel drive required.)  The trick is to pull out slowly and let the wheels grip otherwise the wheels just keep spinning around.

Here’s another tidbit, I learned…. If you squirt the windshield wipers under 20 degrees without the proper fluid with de-icer your windshield immediately becomes an ice rink and you will have to stick your head out the side window to see where you are going.   In addition, you don’t want to leave liquids open in your car otherwise the insides of the windows will be covered with ice condensation. Out in the community I noticed little things like how all the restaurants have coat hooks by each booth. My favorite is when you leave the grocery store a strong blast of warm air shoots from the vents just before you are thrust out into the cold.  Around the neighborhood some things I noted where that many of the houses aren’t fenced in and the backyards just blend from one to the other.  A large majority of the driveways are black asphalt rather than cement.

Nearly every mailbox has a wood house build around it like this….. Except ours 🙂  Do the mailboxes really need their own little house?

Around four thirty p.m. when the skies darken you will hear the sound of the geese flying overhead.  Sometimes a random family of Mallard ducks will come through the yard and there are always lots of bunny rabbits.  The rabbits were cute until they began to eat my new flowers I planted in the spring. Those are my observations since moving to the Midwest.  Well, I have yet to bring in Nick in the picture…..So let’s get to it……… 🙂

Many things have changed during our time here.  Now, I have a car with 4 wheel drive and heated seats….. toasty and a worthwhile investment! 🙂 The kitchen has undergone a remodel and the boys have gotten much bigger. 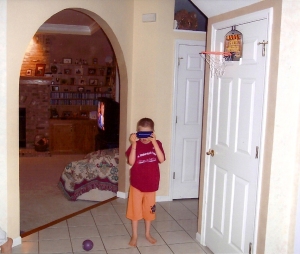 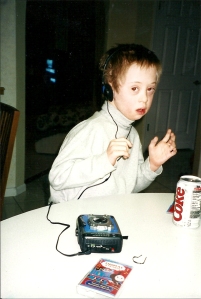 And now….My how technology has changed over 10 years….

His taste in music and movies has evolved; well I guess you could say it has. At least it  progressed out of Barney and Thomas the Tank Engine songs and movies to The Nutty Professor and Mrs. Doubtfire. His ipod playlist is legit now thanks to his brother, Hank.

One more of Nick then……… 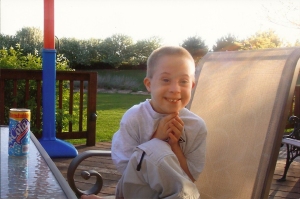 And now…..Nick grew along with the trees and shrubs……

It has been a great 10+ years seeing the boys grow up in the Midwest. 45-50 degrees seems mild to me now. I can now drive decently through the snow and we added a third car. Don’t worry it’s not for Nick 🙂 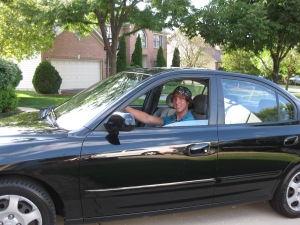 That’s what is in my noggin this week. Until next Monday remember that time has a way of flying by.  Be sure and enjoy the ride!

*In terms of its origin, the phrase “from the get-go” relates to similar uses of these words in other phrases like “get going.”