Blog #178~ 5 Behaviors that have Improved with Age

The behaviors associated with autism has made for a very different journey than Down syndrome alone.  My son Nick is 23 years old and has a dual diagnosis of Down syndrome and autism.  I like many other parents, have been in the trenches dealing with some tough, scary and dangerous behaviors.  The good news is that many of these behaviors have improved with age!

Don’t get me wrong, Nick still has behaviors that we continue to work on.  But these 5 behaviors have greatly improved now that he is a young adult:

5 Behaviors that have Improved with Age

Yes, we have lost Nick a few times and it is one of the most frightening and heart pounding things a parent can experience.  Nick use to think it was funny to take off running.  This behavior has mellowed significantly, with the exception of when he spots a fire alarm.  He’s got a thing for pulling fire alarms, 44 times since third grade! 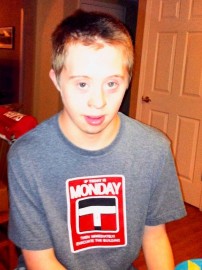 Over the years we have put a few things in place to prevent this from happening.  You can access previous blogs with specific information on how to secure your home and child against wandering in by typing  Blog 142~Wandering and Autism” in the search box.  I still make sure that Nick is arm’s distance from me when out in public.  I also cue him with reminders to “Stay close”, “Big guys keep on walking”, and “Hands to self, Nick”.  Bottom line, now that Nick is older and understands the verbal cues, he doesn’t take off running for the heck of it.

There was a time when Nick flailed and put up a fight when getting a haircut.  It was a two-man effort that left us in a pool of sweat with Nick being red-faced and in tears.  Three things that have helped to make haircuts easier are using visuals, immediate rewards and investing in good hair clippers.  The visuals helped him to understand the sequence of events which lessened his anxiety and showed a positive ending to the experience with highly preferred rewards (Sprite and a shower).

Spending the extra money on a quality set of hair clippers helps to make the haircuts go smoother.  In the past several years, what was a two-man operation is easily done by Nick’s Dad, and with no tears or Sprite needed as a reward.

Autism Spectrum Disorder can cause behavioral and developmental problems, one of which is outbursts, called autistic meltdowns.  For many years, especially during puberty, these meltdowns would cause injury such a pinching, bruising and skin cuts to us and those caring for our son. 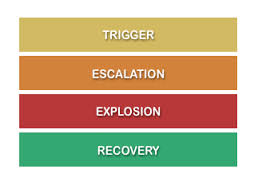 Working with a behaviorist specializing in autism has helped greatly.  Nick has a behavior plan in place that identifies all possible triggers and what to do to prevent a meltdown.  Now these meltdowns are much less frequent and manageable because of learned appropriate coping skills.  More often than not, these meltdowns can be avoided or quickly diffused.

Self-injurious behavior can be exhibited by people with developmental disabilities, including autism.  Such behaviors can include, (but not limited to) head-banging, hand-biting, and excessive self-rubbing and scratching.  Having Down syndrome and autism can often limit speech making it frustrating for your child to communicate.  Self-injurious behavior in itself is communicating something, (anger, frustration, fatigue, and  health issues to name a few).

Getting a solid behavior plan in place, that identifies triggers that might set off self-injurious behaviors has helped enormously.  This can be done with the help of an autism behavior specialist.  Again, visual supports can help to manage behaviors before they escalate to cause injury.  School or private ABA (Applied Behavioral Analysis) specialist can customize visual supports and other strategies for your child. 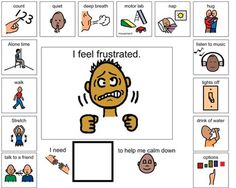 Over the years we’ve identified the triggers that may cause self-injury, and sensing this frustration (for Nick it’s when he pinches his own cheek).  Using redirection and preventing escalation is the key to keeping self-injury to a minimum.

Probably the best news is that poop smears are a thing of the past!  There was a time when we were in the thick of it.  However, “Operation Code Brown” has been shut down. 🙂

Toilet training has been by far one of the most challenging behaviors to work on having a child with Down syndrome and autism.  It’s a marathon, not a sprint, so be patient.  It requires just as much discipline on the parents part, (if not more) than your child.  We used the Azrin-Foxx Method of habit training as the basis of getting Nick fully trained.  This took many years and commitment but it CAN be done!

Things do get better with age.  These 5 behaviors have much improved, now that Nick is a young adult.  Getting support to address the autism piece has made a huge difference.  If you find yourself up against a wall, look for another solution utilizing the help of autism behavior specialist and the school staff.  Finally, try and be patient and rest assured that as your child gets older, these behaviors will improve.

That’s what is in my noggin this week. 🙂

Teresa is the mother of two boys. Her youngest son, Nick is 26 years old and has a dual diagnosis of Down syndrome and autism (DS-ASD). She is a dual diagnosis Down Syndrome and Autism Consultant for DSCBA, parent advocate, speaker, and writer who is currently working on the memoir of raising her son, Nick. You can follow Nick's world on our Facebook page and Pinterest @Down Syndrome With A Slice of Autism. Find Nick on Instagram@ #nickdsaustism, Twitter @tjunnerstall. View All Posts

Teresa is the mother of two boys. Her youngest son, Nick is 26 years old and has a dual diagnosis of Down syndrome and autism (DS-ASD). She is a dual diagnosis Down Syndrome and Autism Consultant for DSCBA, parent advocate, speaker, and writer who is currently working on the memoir of raising her son, Nick. You can follow Nick's world on our Facebook page and Pinterest @Down Syndrome With A Slice of Autism. Find Nick on Instagram@ #nickdsaustism, Twitter @tjunnerstall.