Last Thursday a longtime friend that I worked with at the Austin YMCA posted a question on Facebook.  Jim P. has been on a spiritual journey and asked how everyone deals with control?   Ironically, I could not have been in any less control than that moment.  Not having control is scary.  It means you have to leave things in the hands of others.  It requires you to have faith that God will take care of you and the problem at hand.  Nick has been receiving state funding through a child based waiver under the umbrella of Medicaid.  The funds are used for respite care which allows me to still teach my classes and go out and have a life on occasion.  The Department of Human Services (DHS) had sent out a renewal form that I filled out and sent certified mail weeks ago.   Bases covered, I was on top of my game.  Not so fast…..

I called DHS the day before the end of the month to check on the status of the renewal.

“The lady I talked to a few weeks ago said she would change my son from child to adult waiver in the system pending the renewal form being sent in.”

DHS operator replied, “No she can’t do that for you.  A new form must be submitted.”

Oh crap, I am going to lose the home based waiver and have to get back in the queue*.  This could take months. Last time it took 9 months to process, I am F’d!

I hung up the phone, confused and wondered why I had not been informed about this.  I immediately contacted my friend Nancy Wilson that I’ve known through The National Association for Down syndrome (NADS.) She has a consulting business called A New Ray of Hope, www.anewrayofhope.com.  She knows her stuff on health advocacy, education advocacy and is a resource specialist. Her son, Jeremy has a dual diagnosis of Down syndrome and autism and is close to Nick’s age.  Nancy laid out the facts for me clearly and succinctly:

1.  DHS is a big umbrella with many programs under it.

2.  Medicaid/Medical Health Benefits is a program through HFS – Healthcare and Family Services.

3.  Medicaid is a requirement for any DD (Developmental Disability) services.

4.  SSI (Social Security Income) is NOT a requirement for DD services

5.  Medicaid is redetermined when a child reaches the age of 19

6.  The respite hours is Home Based Waiver funding under the DHS Umbrella, it is a Medicaid Waiver program through the DD Division (Division of Developmental Disabilities) for which you work with a PAS agency.

8.  Medicaid is much easier to get if you have already been approved for SSI because SSI does a thorough redetermination of benefit eligibility for developmental disabilities

9.  That said, you do not have to have SSI to get the Home Based Waiver

10.  Who is telling you that he will be dropped?  Pact?  Little City?  Medicaid?

I was caught in the tangled web of government bureaucracy.  It was the end of the month, and the home based waiver was ending.   I had to scramble.  Nancy sent me the link to fill out the application for adult Medicaid.  I made a big pot of coffee, rolled up my sleeves and got to work.  My only hope was to hand deliver the application into the DHS office that day so it would be stamped before his child based waiver expired. I entered the crowded, dingy office.  It was jammed with over a hundred down trodden people whose glazed faces exhibited despair sitting slumped in plastic chairs. I followed the Pakistani gentleman in his native dress and waited behind him in the line. The lady in front of him held a baby and had two small children clinging to her.  She was in desperate need for food stamps but was turned away.  My problem seemed trite in that moment.

I stepped up and the clerk informed me that I probably wouldn’t get the adult home based waiver anytime soon since Nick didn’t have SSI income.  What, that’s not what Nancy told me, again the mixed messages, WTF?   She took my paperwork and looked somewhat surprised that they were in good order and fully completed with all copies attached (Nick’s birth certificate, SSI card, insurance card, checking account information and his state ID card.  No he doesn’t have a driver’s license imagine that.🙂  She stamped the date February 28, 2013 and put it on top of one of the many foot high stacks of applications.  I said a quick prayer as she set it on top of the pile.  Please God, let this go through quickly.

Adversity can test our limits but it also teaches us lessons.  What did I learn?  When you feel like you aren’t getting the answers you need reach out for help.  Nancy has been a mentor and resource that has helped me navigate Nick’s path filled with its cobwebs of confusion. The red tape is daunting as your special needs child becomes an adult. Moving forward we will be enlisting a special needs lawyer.  Secondly, when your child with special needs turns 18 years old run, don’t walk to fill out the SSI application.  I stalled having heard horror stories of the process. While I have filed for SSI just over a month ago I have no answers yet.  Last but not least, never assume! Back in college I worked at Super X Drugs. Rex, (or as I called him Super Rex) was my boss. He gave me this sage advice. “Never assume, it makes an ASS-out of U- and ME.”

That evening Nick wasn’t feeling in control.  I had forgotten to run the dishwasher and he was unloading the dishes. As I took a dirty bowl out of the cabinet and put it back in the dishwasher he lunged at me pinching my hands hard until they bled.  He was mad that I was undoing his work. Later in an act of defiance he emptied out my red nail polish from the second floor. 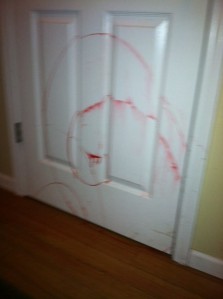 Clearly Nick just like the rest of us wants to feel like he is in control.  The last day of February was one of the worst that I’ve had in a long time. Late in the evening, I sat on the couch by the fire with a glass of wine and managed to relax and feel a wave of comfort and peace.  Sometimes what you need most is to find those who can support you along with a nice glass of wine. Oh and a whole lot of cotton balls and nail polish remover. 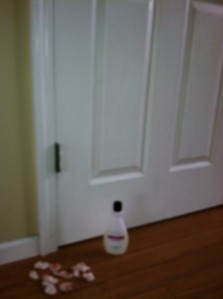 That’s what is in my noggin this week.  Until next Monday, cheers and let me know how you handle things when you are not in control.