Once upon a time, Nick only had Down syndrome.  I am unable to say with any certainty when the light switch flipped.  The symptoms of autism didn’t appear after any round of immunizations or before the age of 3.  In fact there were many symptoms that Nick didn’t have.

Autism is defined by the Mayo Clinic as, “One of a group of serious developmental problems called autism spectrum disorders (ASD) that appear in early childhood — usually before age 3. Though symptoms and severity vary, all autism disorders affect a child’s ability to communicate and interact with others. Children with autism generally have problems in three crucial areas of development — social interaction, language and behavior. But because autism symptoms vary greatly, two children with the same diagnosis may act quite differently and have strikingly different skills. In most cases, though, severe autism is marked by a complete inability to communicate or interact with other people. Some children show signs of autism in early infancy. Other children may develop normally for the first few months or years of life but then suddenly become withdrawn, become aggressive or lose language skills they’ve already acquired.”

Nick has always found a way to connect with people.  Years ago, when he was around 2 years old, a woman approached me in the local Kroger supermarket.  She went out of her way to tell me how good Nick’s eye contact was and how engaging his personality was.  Countless doctors, therapists and teachers have made the same recognition over the years since then. He thrives around people and having fun with them.

Fun with his Dad and brother, Hank 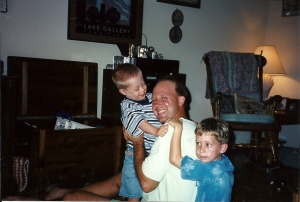 As I mentioned earlier, there was no flip of the switch.   A few things stood out around the age of 4. At the time, we lived in northern California. He started rocking more back and forth and became increasingly intolerant of having his hair cut.  Then there was the trip to Half Moon Bay where he began to pinch his cheeks hard as we walked across the coarse grain sandy beach. I suspected these behaviors were sensory related.  To make sure all the bases were covered I took him in to be evaluated for autism at age 5.  The Mayo clinic states that, “Though each child with autism is likely to have a unique pattern of behavior, these are some common autism symptoms:

Of the symptoms listed above, Nick displayed none in the social skills category.  The physician noted that his slow speech development was probably due to having Down syndrome and Verbal Apraxia (a neurologically based condition that is characterized by difficulties planning and producing the complex set of oral movements necessary for intelligible speech. For more information on Apraxia click on my favorites section, a new book, Speaking of Apraxia- A Parent’s Guide to Apraxia of Speech by Leslie Lindsay has just been published.  Regarding behavior, Nick did exhibit a few of the symptoms but never was fascinated with spinning any objects or sensitive to light or pain.  So cut to the chase, after the screening the conclusion was he did not have autism.

Fast forward 6 years later, his speech hadn’t improved and the behaviors were growing more severe.  Nick’s speech was limited.  Imagine someone putting duct tape across your mouth and trying to navigate the world.  With no voice he would get frustrated and turn to throwing such things as a chair across the room or breaking a glass across the floor.  Worse yet, he would have meltdowns that drew blood and bruises when he would pinch, kick and bite. At Gi Gi’s Playhouse group time (a local Down syndrome support group,) I began to notice that he was playing more by himself and primarily with any musical toy he could get his hands on dancing side to side.

This was more than just Down syndrome.  Next stop Little Friends Center for Autism.  The second screening was much more comprehensive and included a team of therapists who individually assessed him.  Voila, diagnosis confirmed.  I can say first hand that the evaluation methods had improved tenfold.  I suspect that is one of the reasons why the incidences of autism cases have risen so significantly over the past five years.

So back to the Nick connection, because he has always been highly social it was hard to see that somewhere in the midst autism had crept in.  The tapping, rocking, hand flapping, humming and the sounds of musical toys had become white noise to us like the dryer running in the background. We had become immune to them all. To us he was the guy who won over the hearts of everyone he touched.  He was the fun guy who can click with everyone. When he was much younger he had a belly flash club.  He wouldn’t see his Aunt Laura or my friend Sally for months and yet when he would reunite he greeted them by lifting his shirt up and flashing his belly.

Nick getting ready to belly flash!

He likes to give a high five, rub elbows, noses and he loves to get raspberries. Oh and let me not forget the burps, fake sneezes and what we like to call “force farting” to get your attention. For that I am grateful, well maybe not the force farting (Al’s term given for when Nick pushes out one to get a rise out of us) 😉 but I am glad he is so engaging.  And I have to say those who know Nick can attest to the fact that he can replicate exact sneezes after you do yours. Even Aunt Ali’s tiny, high pitched achoo!

Elbows… with his teacher, Rob 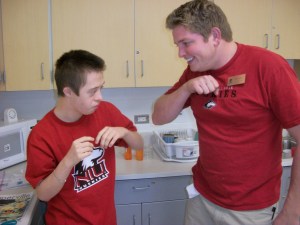 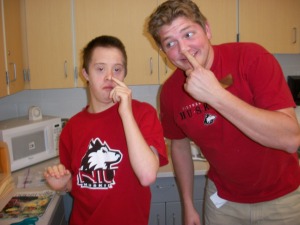 The fact that he can make those connections warms my heart as his mother.  That’s what is in my noggin this week, until next Monday….May you find those special ways to connect with those around you! 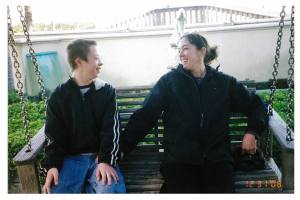 7 thoughts on “Blog #6 The Nick Connection”