“Wash… wash…wash,” I hesitated going into the other room in fear of what Nick might be doing.  Would it be my fitness shoes in the sink under the faucets running full blast yet again?  To my surprise, I went into the laundry room to witness him taking the dirty clothes off floor and one by one plunking them into the washing machine and with each one saying the word wash!  It hasn’t just been the laundry either. For the past year, he has step up in other household chores.  Trying to get his brother, Hank to unload the dishwasher was like trying to pull teeth.  But Nick completely enjoys his role that he took over since his brother left for college last fall.  Everything has its place and his careful eye has taken note over the years.  He proudly puts every cup, plate, pot and pan along with the stemware carefully in the cupboards. 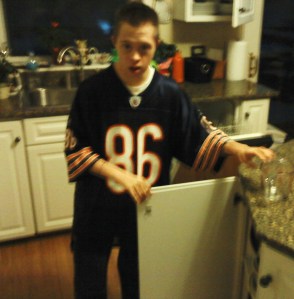 A few months ago I packed away the last of the Christmas ornaments and decorations and pulled out the vacuum to clean up all of the needles that had fallen on the carpet. I plugged the cord in and turned around to see Nick with his hand on the handle.  He was ready to take it on!  Much to my surprise, he not only navigated it but held the cord appropriately off to the side and did a nice job running the vacuum across the carpet.  I knew he was doing this for his school job at the elder care home but had no idea how well he was performing. 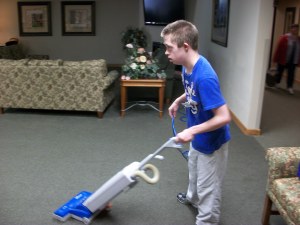 I have to give all of the credit to the staff at his high school.  Mrs. W brought in Northern Illinois University (NIU) to do a study that was done on six of her students last year.  The abstract was about maintaining vocational skills of individuals with autism and developmental disabilities through video modeling.  Research has shown that using video modeling helps to promote independent work-related behaviors and decrease the reliance on staff.  Video based supports often result in fostering independence and generalization of job related skills.  This means there is less reliance on job coaches and co-workers all for which are critical for sustaining competitive employment.  It is like a script in that breaks down the tasks that need to be performed.  These short videos are narrated in the background with short verbal prompts.  Nick watched them every day for two weeks and then each time before he was to perform a particular task. In the case of the NIU study the videos were for loading the dishwasher and washing machine.  What I noticed immediately is that Nick enjoyed watching them over and over again.  They are much more effective than any task strip that he has always used in the past. Here is an example of a task strip:

For me the proof is in the pudding*.  I noticed a significant increase in Nick initiative and accuracy in helping out around the house.  The videos did in fact increase his generalization to doing other chores besides these two.

While the jobs are pretty basic for most people, for Nick they mark a milestone.  His goals are no longer academic in nature for the most part they are all functional.  Functional goals are non-academic and generally understood to refer to skills used in the context of routine activities and daily living. Anything he can do independently gives him not only a better chance at getting a job upon graduation but also a placement into a group home someday.   Right now, he also has many other jobs at school including shredding, washing windows, loading the dishwasher, recycling and washing clothes for the PE department.  This week we have his annual IEP meeting to discuss his progress and goals for his senior year of high school.  As I look back it is amazing to see the progress he has made given his disabilities.  At this rate, I am going to be able to give him the reigns around the house while I sit back on the couch, prop my feet up and eat bon bons!  That is what’s in my noggin this week. 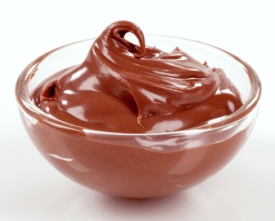 *Origin of Proof is in the Pudding

Proof in this case means “ultimate test.” To “prove” used to mean to test, a meaning which survives in a limited number of usages. This is one: it literally means you can show me a wonderful recipe, and tell me about your fine ingredients, but ultimately, the test is in the thing itself, the actual results.